So, you want to get organized at home, but you have stuff to do that you don’t want to do it. What’s that all about? I think I might have the answer and with a little bit of help from a friend, I have a 4-step solution for you.

A Little Help from a Friend

This week, I talked to a very funny woman and she was so inspirational, I just had to share her humor and wisdom with you when it comes to being a procrastinator.

exercise videos for my Club Organized website. She’s just adorable and so inspiring when it comes to getting herself to take care of things she tends to put off.

Kristina is an amazing ball of fire! Her personal story is compelling. (I keep telling her she has to

write a book.) She weighed almost 200 pounds on her 40th birthday and when she saw the photos from her party, those pictures were the turning point for her. She told me that although she was grinning and looking happy in those photos, she was miserable and she decided to do something about it.

I’ve known her for four years and my guess is she weighs about 120 pounds. I can’t imagine her being 200 pounds, but she has the photos to prove it! She loves to show them to her classes, inspiring women to get fit and be healthy.

When we talked the other day, she told me about her problem with procrastination and how she’s solving it. Although she hasn’t read my books she knows about my inner child Nelly. She hasn’t gotten around to naming her inner child but she’s sure she has one and hers is rebellious and loves to play! She told me she came up with a plan which is really working and it involves her inner child.

Step One: Make a list of the things you’re putting off and arrange them in a priority. Tell your rebellious inner child she gets to put off doing anything on the list for two hours. Use your timer.

Step Two: In the first timed hour do whatever you want to do. Be free. Call it your freedom hour. Let the kid in you decide what to do and mind her.

Step Three: In the second hour go outside and play in the dirt or do whatever you like to do outside. Maybe it’s walk, or garden, it’s all up to you, but it’s your time outside. Again time yourself.

Step Four: When your two hours are up, set the timer for one hour and work on a procrastinatory (Kristina’s word) task. 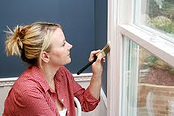 One of the things she’d been putting off was figuring out how to heal her financial problems. She’d been to a conference where she remembered one of the speakers saying, “When you have a financial problem, often the money you need is right under your nose.” Kristina took one of her procrastination-solving hours to figure out what to do about her income. In that hour it dawned on her that she and her two daughters bounce around in their huge home and really live in less than half of it.

She went to a construction school down the road from her home and asked the owner if any of the school’s students needed housing. He told her his students were always looking for rooms.

Her home is so convenient and close to the school that she has been able to rent out the upstairs to four students and she and her girls are happily living in the basement which has a full kitchen.

She now brings in an amount of money that helps her live comfortably and stay on a budget that doesn’t run up credit cards. Kristina said, “All because I quit putting off figuring out what to do!”

She loves playing with her inner child and letting her play before she works and she told me she gets so much accomplished even in that play time.

Often it’s easy to do what I call the Scarlet O’Hara. Scarlet said in Gone with the Wind, “Oh, I’ll think about it tomorrow.” If you’re procrastinating some figuring out time, put your timer on and go play, then after you’re all played out, spend an hour figuring. Who knows, you may even come up with some solutions while you play.

Speaking of procrastinating, when I wrote my latest book The Joy of Being Disorganized, I used writing that manuscript as a carrot. Because it was such a joy to write, I began putting off my valued daily routine! I had to tell my inner child that we were going to write after we got the other important things accomplished. If you’ve tried to get organized in the past and you’re still struggling, I know this book can change your life, because it’ll change your perspective. I’d like to give you one of my favorite chapters in the book. It’s called There Arose Such a Clutter. Read that chapter and you’ll get a whole new perspective on clutter in your home. 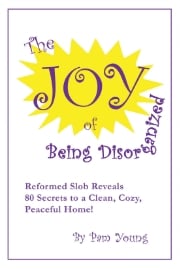