DING DONG the Witch is DEAD! 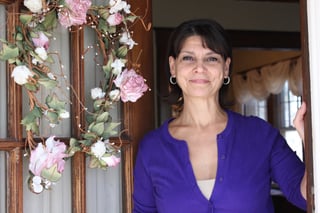 Kathy is a longtime friend, sister reformed slob and owner of Tidy Tutor University. She's fun, funny, talented and creative and if you haven't checked out her website, please do! She has tons of videos to share. www.tidytutor.com

Have you ever thought that when we procrastinate we are really over neglecting? As pros at procrastination we could say we are master neglectors. I can’t think the words DING DONG without thinking next about the Wicked Witch of the West which automatically calls up that memorial tune sung by the Munchkins.

So little Munchkins, what if we thought of that old wicked witch as something looming over us that we have to do and we keep putting it off and she gets bigger and bigger and wickeder and wickeder? When we DING DONG, the witch dies! She’s done, gone and we’re free!

If you have something looming right now, sing along with the lyrics below and get the feeling of having that looming task done, then DING DONG.(do it now girl and don't over neglect girl).

Want to sing the song?

END_OF_DOCUMENT_TOKEN_TO_BE_REPLACED

Wearing loose fitting clothes while we stay in a state of denial...

I was deeply touched by Marla and Leanne’s courage to be honest with us about the issue of their body clutter. It’s embarrassing to admit to being in denial on a subject as personal as our bodies. As clutter goes, there is nothing with which to compare to our body clutter. We can’t stash it like we can household clutter; we can’t store it in the attic, basement or some storage facility. We can try to move it around by wearing control top panty hose or tight jeans or try to cover it up by wearing loose fitting clothes while we stay in a state of denial, but eventually we have to face a moment of truth.


I am just like Leanne in that over my adult lifetime I had lost and gained the same twenty pounds at least eight times (I’m older than Leanne). That’s 160 pounds I’d lost before I faced my moment of truth. I had 35 pounds to lose. My denial caused me to go three years without facing my body clutter and had I continued in my mode of

denial I could have gained 70 pounds in six years. It took holding a five pound bag of flour in my hands and feeling the weight of it to wake up and realize I was carrying the equivalent of seven five pound bags of flour around. Today, if I could somehow strap seven, five pound bags of flour to myself and try to wear them for a day, I wouldn’t be able to do that. Yet my little body had carried that burden until I woke up.

Eight almonds and a lot of denial

END_OF_DOCUMENT_TOKEN_TO_BE_REPLACED

They haven’t come up with E-food yet, but they will, you just wait and see.

I’ve been on vacation for a week. One of the highlights of the respite was having lunch with one of Terry’s professors. Mr. Mott made a profound and lasting impression on my wonderful husband. (Thank you Mr. Mott.) Terry has so much respect for the man he cannot bring himself to call him Robert or, God forbid, Bob. Mr. Mott and his wife Edie are in their nineties and both sharp mentally, mobile and healthy. I asked both of them at lunch in a very nice restaurant, “Do you have smart phones and are you on the internet?” Mr. Mott uses a form of email I won’t go into, but otherwise the couple agreed that at their ages they were enjoying life just as it is without the invasion of technology. They both agreed that each day was so filled with thankfulness they are mobile and healthy there was no room for anything else.

During this vacation, I took the six days off from the 21st century and never once even looked at a computer. I didn’t answer anyone’s emails or write my weekly Young@Heart for the last week of March. I just lived in what I’ll call a techless world. Yes, I was party to using the GPS while we “Yelped” our way around San Diego and yeah, once I talked on Terry’s cell phone (which is now a very smart phone thanks to Flylady’s Robert), oh and yes, I used the computer timer on the oven in our condo we lived in for a week, but the rest of the time I enjoyed the real world right in front of me just like Mr. and Mrs. Mott.

There were times when I felt a little like a beloved family dog. Marla, Robert and Terry spent a great deal of our living room time on their thingamajig of choice while I sat and talked to myself, read a little, wrote on a yellow pad and played "retro" Solitaire. (That’s a game you play with a standard deck of real playing cards, dealt onto a real table.)