Water Doesn’t Care if You’re Organized or Not!


Writing in the present tense about a negative situation is flat out complaining and I try to curb my urge when I’m in the middle of bad times, but writing about a situation in the past tense and when everything’s back to normal, just makes for a good story. With that, I have to tell you what happened.

There’s a lesson to learn from every negative situation, and I make it my life’s work to get the lessons so I don’t have to repeat situations with a different cast and crew. For example, I learned from being in a marriage that was difficult, y ou can’t make a person who’s not happy be happy. The second time around, I married someone who was already happy!

Now for my most recent lesson: Water always wins. We live in the state of Washington where we get a lot of rain. I happen to love rain (when it stays outside) and I wouldn’t want to live anywhere else in the world except maybe Positano, Italy. We built our home in Woodland, Washington, eleven years ago and we have enjoyed its cozy, lodge-like feel. We work out of our offices which are in our basement and about five years ago we discovered a minor leak in an insignificant place in the basement and on the concrete floor about 40 feet from our offices. After a hard rain, my husband Terry, would crawl back to “the place” and come out with a report we called the Paper Towel Report.

That conversation took place about six times through each rainy season, which, in Washington, lasts from October to June. However this January something changed. There was a huge rain storm that carried on throughout the night and I could hardly sleep guessing what the towel count would be. Terry headed to the basement the first thing the next morning and I was pleasantly surprised to hear him say, “One.”

One towel, wow! I was ecstatic as I fixed breakfast. If you’ve ever had a flood in your home, you know what has to be done if you plan to stay in the residence afterward. Our carpeting had to be ripped up (it was salvageable when it dried out) and the padding discarded and replaced, and then there were the walls. Sheet rock had to be replaced and after it was ripped off, the wood frame had to be dried out.

There are flood experts that deal with this exact problem and they placed huge heaters that looked and sounded like Boeing jet engines in our offices. 24/7 the monster fans blew hot air in the flooded areas until the wet wood and carpet were completely dry. The sound was unbearable and we had to move our businesses upstairs.

The experts also used huge de-humidifiers in each room that pull the moister out of the air and any of the people who live in the home. (I couldn’t believe how thirsty I was all the time, until I realized I was being dehumidified!) I truly think if it had taken more than the two weeks it took to dry the place out, we would look like a couple of California raisins.

Now it’s one thing to deal with the result of a flood, but one also has to find the cause. Another team of experts came with a backhoe and dug up the yard and the dirt along one side of our house. All the pipe had to be replaced (it was broken because of a freeze we’d had earlier) with a promise that we won’t even have to check on the paper towel place. 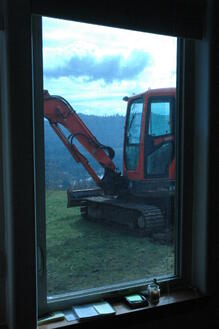 I wish I had some organizing advice for you, but I don’t. Sometimes bad things happen and it doesn’t matter if we’re organized or not.

Here is some organizing advice in a blog I wrote about the reasons you're still disorganized.