Back from Italy! Glad to be Home!

Do you dream about traveling to exotic places? Do you ache to see famous points of interest like the Eiffel Tower, the Tahj Mahal or to meet Michael Angelo's David even though he's naked? When you hear about a friend or neighbor getting to go on a cruise or spending time in Paris, London, Amsterdam, Hawaii or just about anywhere short of North Korea, do you find yourself craving to go and feeling bad because you can’t? Do your travel dreams get squashed because of your workload, lack of money, too many kids to take along or a bunch of other reasons?

Mom always wanted to travel when my sister Peggy and I were growing up, but we never got to go very far because we didn’t have the money and Dad couldn’t take time off from work. But that didn’t stop Mom from planning! Bless her little, organized heart; she subscribed to “Holiday Magazine,” a glitzy periodical for the rich (and we weren’t)! It even looked and felt expensive because it was in full color and heavy because every page was almost as thick as the slick cover. Also, it was filled with lots of ads for diamond jewelry and fancy cars in addition to the places it urged us to go. Mom plotted out trips complete with itineraries, destinations for dining, recreation, accommodations and such, and collected them all in her cherished box of travel dreams; her version of a bucket list, where they all waited for the day they’d take us away. We never went.

Remember George Bailey in “It’s a Wonderful Life” saying, “You know what the three most exciting sounds in the world are? Anchor chains, plane motors & train whistles.”? Those were Mom’s words too and like George Bailey her energy went into creating a wonderful home-life for our family and not into traveling the world.

My husband Terry and I just got home from a two-week vacation to Italy and first, I’d like to 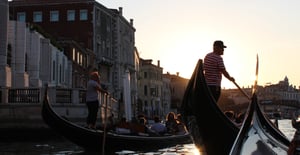 thank all of you who have been patiently waiting for your orders from me. Please give yourself a bunch of points for your patience! All orders went out today. Second, I’d like to share a valuable lesson about travel I learned because of those two weeks AND share some of the incredible photos my very talented husband took to document the trip.

A Lesson on Travel

The lesson I learned is something the travel industry doesn’t want you to consider. Actually I learned it on the way home in the jumbo jet filled with travelers from all over the world. The trip home took 24 hours counting all the connecting legs and waits in airports (the transatlantic part was an 11-hour flight) and the lesson came while watching one of the three in-flight movies which happened to be “Under the Tuscan Sun” starring Diane Lane. Here’s a preview of that movie, which is really worth watching! (Both, the preview and the movie.) Just click on the Tuscany countryside to watch the short video.

I’ll share the lesson at the end of this blog. For now, it’s important you know when I got the lesson, because until that point in our trip, I couldn’t put my finger on what I was supposed to learn, even though it kept nagging at me throughout the whole trip. For now let’s go to the villa we stayed in in Tuscany.

This Villa called Casanova dei Boschi is 400 years old; older than the United States of America! It was hard to wrap my mind around that fact and I don’t think I really ever did. It’s located outside the town called Montepulciano which just happens to be one of the towns shown in that preview I hope you watched. The villa was situated two hours on a freeway from the airport at Florence (Italians call it Floor-en-zee.). Unfortunately it took us five hours to drive there because our GPS (which spoke Italian, we don't) had us going in circles and we couldn’t find the expressway though we managed to go the wrong way on a one-way street and couldn’t get the van in reverse so we could turn around. (After ten minutes fiddling with the gear shift and learning the Italian gesture for IDIOT, Terry discovered he had to pull up on a ring around the gearshift for the transmission to honor us with its reverse.) 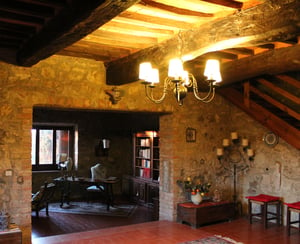 My bonus daughter Kristi planned the entire trip (totally my mother’s daughter even though she wasn’t) and while she and her family traveled through southern Italy for five days, her plan was for us to rent the van to seat seven, meet them at the train station when they came in from Rome and spend the next five days together at Casanova dei Boschi. We ended up getting the caretaker of the villa to navigate the journey from the villa to the train station to pick them up, even though he was hard of hearing and didn't speak English. Pointing works in all countries! 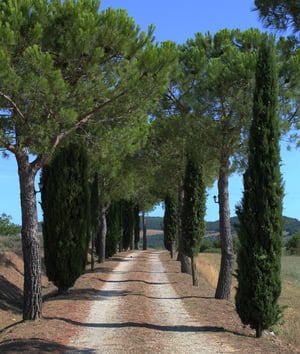 Okay, here's the lesson. The only reason you want to travel to places you've never been is because either someone who has been there told you about it and made you want to go there too or you've seen those places in magazines, movies or on television. After spending five days under the Tuscan sun, somehow it didn't match the movie experience, because movies aren't real life, they're suspensions of reality. For one thing, it was 95 degrees every day and one of those days we were enticed to go on a day-long bicycle tour "meandering through ancient villages ending up at a vineyard for wine-tasting." (We were told the route was gentle and for beginners, which at the end of the day left us wondering what an intermediate tour would have been! Some of the hills were reminiscent of San Francisco.)

While watching "Under the Tuscan Sun" it hit me that we'd been to many of the places Touchstone Pictures took us in that film but it left out the not so glorious and romantic stuff of travel life which includes crowds, waiting in lines, noise, heat and the expense of it all. In the movie there was no learning to back up in a rented van, trying to read Italian road signs, ordering food for a gluten and lactose intolerant husband, no pillows the size of Kotex Mini Pads, no Italian yellow jackets (meaner than American ones) no picking between running the air conditioning or the dishwasher. When you travel, be prepared for reality, because it follows you everywhere you go.

As I write this, I know I'm under the spell of jet lag and I'm sure by tomorrow all the joy that I experienced in beautiful Italy will come bubbling up. Right now, I feel like the next time I get the urge to go to Italy, I'm going to watch "Under the Tuscan Sun" and order the meat lover's pizza from Anthony's Pizza right here in Woodland, Washington!

So the lesson is really that you take yourself with you wherever you go, so if you can't go someplace else right now have fun right where you are!

Oh, one more thing, could you please buy a book from me? I need to help pay for the trip! Just click on this photo of my bonus daughter, Kristi, Kaytee (our granddaughter) and me. I have no clue what we're looking at! 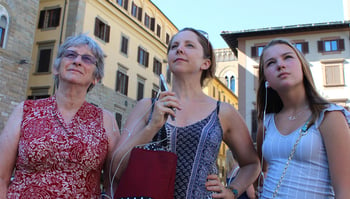