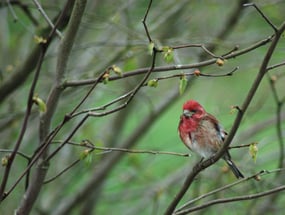 No, that’s not the sound of three, loud, happy finches outside our early morning window; it was the excruciating, warning sound of three, energy-deficient, smoke alarms needing new batteries….or so we thought.

You obviously know that sound. SHEs (Sidetracked Home Executives) are not very good at semi-annual duties.

We immediately went out and bought the 9-volt batteries for the eight noisy lifesavers throughout our home, but the chirping continued in spite of their infusion of new life. At the height of the unbearable chorus of noise, I was ready to purchase a gallon of putty to fill each hole where the smoke detectors once lived, and settle for the rare chance of sizzling alive in our sleep. (Seems smoke alarms are meant to wake us up if there’s a fire. In the daytime we’re awake and really don’t need the alarm.)

Turned out our smoke alarms were not oozing vitality because of their dead batteries. We found out their lifespan is 10 years and our little smoke warners were 18 years old. Putting in new batteries was kind of like putting a new heart into a 110-year-old guy on his death bed.

They say in all the literature that changing out a smoke alarm is as easy as changing a lightbulb. That’s a cruel joke for a challenged DIYer. We opted to wait for our overnight guests who were flying in the next day. Rumor had it the man had skills.

In the meantime, we removed the chirping dervishes from their ceiling homes and took out their new hearts with the assumption we’d hushed the chirpings. Not so! They mysteriously continued to tweet, as they gathered together in a plastic Walmart bag waiting in the laundry room for a trip to the garbage can in the garage. They reminded me of chickens with their heads cut off. (A scene locked into my mind when I was seven years old. The chickens continued to run all over the place even though they had no heads.) 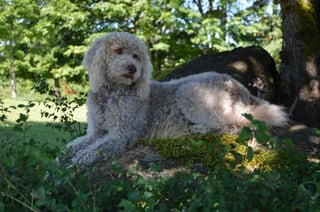 Maggie, our labradoodle, (seen here in her usual, peaceful mood) was a panting wreck because of the piercing, intermittent sounds, and I don’t blame her. I assume dog’s hearing is far better than ours and the chirping hurt my ears so I could only imagine what it was doing to her tender dog ears.

Our guests, Kristi (Terry’s daughter), Kyle and Tanner (our adult grandsons) and Matt, (Kristi’s “handy” boyfriend) arrived the next day. The Walmart bag had been moved to the garbage can by then, because some of the “chickens” were astonishingly still chirping. Matt volunteered to take over! 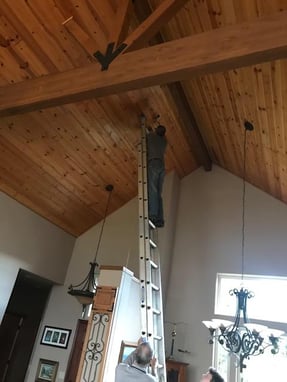 Here he is on a thousand foot ladder, borrowed from our neighbor. He’s removing the one smoke alarm we couldn’t reach. (At one point in its life we’d whacked it with a long pole to get it to shut up and it did!) (It was probably a faulty contraption in the first place.)

If you’ve lived in your home for more than nine years and you still have the same smoke detectors, give yourself an early Christmas gift…the gift of silence. Replace them before they die, chirping their way to the grave. This weekend would be good.

Another special gift for Christmas is a gift of humor and money all wrapped up together. "Stick it "Right on the Money Gift Giving Kit" gives you a fun way to give cash for Christmas. Learn more:

Stay strong and happy as we go through this world of the unknown. One thing we do know is we're not alone; God is with us.