Do What You Love ~ You'll Help the World

Perhaps the answers to these questions could give you a few clues as to what you should be doing as soon as possible. So many women have a hard time nailing what it is that they want. That’s probably because they spend so much time caring for others; their children, older parents and husbands.

I just watched a 90-year old woman ice skating on a YouTube video. It was a documentary that followed her career as a young ice skater to her end. She died on the ice. During interviews with her, it was so easy to see the joy this woman had for ice skating. In her 80s she was at the rink five times a week. She made you want to do what you love and she was such a remarkable example of what that can do for a person. She was happy.

When I first started thinking about this, I asked myself, “If you knew you were going to die tonight, what would you have wanted this day to be like?” The thought of dying tonight was too sad for me to think about what I’d do, so I came up with the thought to put the whole concept into the past. That way I made myself already dead! Then my mind was open to thinking what I would’ve done. I liked that way better.

So take a little time and think about what you would have done today. Then make some plans to do that. One thing that came to my mind was that I love to hold babies! I got to thinking how valuable that desire could be for babies who don’t get held enough, like at day cares where the staff just doesn’t have time to hold babies when there are so many and they have so much to do. I’m going to volunteer at a local day care to just be a “Lap Grandma.”

I remember Peggy and I spent a day years ago staying for 8 hours at two different daycare facilities. I spent the day in a non-religious day care facility and she stayed in one attached to a church. Both places wondered why we’d want to visit for an entire day, and we told them we wanted to put ourselves into the position of the children who have to stay there all day.

Much of that day, besides doing my research on daycare establishments, was spent holding children. One little boy didn’t feel good and was running a little temperature. He just wanted to be held. Others wanted the same and it made me think about mothering my own children. Much of that time when they’re little was holding them until they were ready to take off on another adventure!

Perhaps what’s going wrong with those young people who go on rampages with guns is that they just didn’t get to be held enough when they were little. If I can spend a few hours a week just holding children, I’d really like that.

I’ll let you know what happens on that front.

Because we can easily put others first, because that's what we've been used to doing, it can be hard to spend money on ourselves. If you sense that if you were organized you'd be able to achieve your dreams, then maybe all you need is to take a little time with someone who has been in your shoes and can help. If you'd like to spend some personal time with me, I'd love to help you nail what it is that you want to do and get organized just enough to do it. I've spent the last 40 years helping SHEs get organized and I'm able to distill my experience into personal, one-on-one coaching. 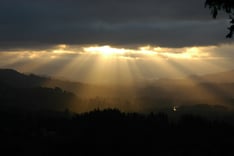 Just click on on what I call God rays and schedule an hour with me. We'll have fun as we look at your life with a new perspective. Here's what Jan wrote:

"In just one hour, really about 20 minutes, Pam helped me resolve what it is that I want to do. I'm 50 and have had a very successful career that has paid me well, but getting divorced  caused me to feel like I was embarking on a new life. I'm a SHE [Sidetracked Home Executive] and have been using the 3x5 card file system for years, so getting my home ready to sell has been easier than it would have been without the system. The phone call with Pam was truly at a crossroads for me and she inspired to step into the light of my new life with such a sense of joy and fun. Thank you Pam!"

P.S. I would really appreciate it if you would share this blog with a friend who you think would like to read it. Just click on the "share" button and send it forward. Thank you.