Going Through the Holidays on One Leg

We can learn so much from the so-called negative situations we all have to face from time-to-time in life. Not that we need them in order to grow spiritually, but they certainly help if we let such events teach us something.

While in New York over the Thanksgiving holiday, my son Michael and Lou his golden lab and 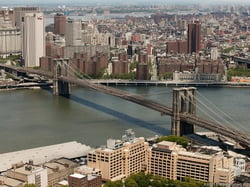 I took a walk on the second day I arrived. It was a beautiful morning in Brooklyn and the two of them were showing me around their neighborhood. It was obviously a younger community with lots of renovation going on. Quaint, old buildings gutted and remodeled like new, young people walking, jogging and enjoying each other. The sidewalks were all lined with the trees that grow in Brooklyn, each succumbing to winter in its own way.

At one point we came to a block that was lined with at least 40 fancy, baby strollers. They were all top-of-the- line carriages; more like portable nurseries.

“Why are all these strollers lined up? Is there a stroller sale going on?” I asked.

“No, the daycare is just up the block and the nannies park them in a line so as not to clog up the sidewalk,” Michael responded.

“These strollers are for babies in a daycare?”

“Yep, the entrance is coming up. Lou loves the babies, so I never want to be here when the daycare lets out! It's like a rush-hour, stroller jam and all the nannies are pushing these babies while talking or listening on their cell phones and Lou wants to kiss everybody.”

I'd never seen a nanny before so I started seeing them everywhere! And Mike was right, they all seemed preoccupied with their phones. My heart hurt for the moms and babies who don’t get to be together at this precious, fleeting time in a baby’s and a mom's life. Michael went on, “Once in a while you’ll see a mom pushing a stroller and you know it’s the mom ‘cause, uh the mom matches the baby.” I started looking for matches as we clipped along to Lou’s pace toward the Promenade. I could see the Statue 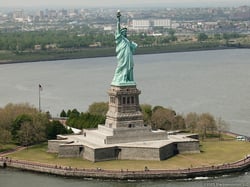 of Liberty in the distance.

Because of the tree roots, there were many vaulted sidewalks and I managed to catch my toe on one, flew forward like I was shot out of a cannon and didn’t quite get to tuck and roll, so I landed on my right kneecap (it’s called the patella). As I lay there, both my companions were concerned and a woman who witnessed my fall came up to see if she could help. It took about a minute to talk myself into the thought that I just tweaked my knee. I could bend my leg and when I stood up I could put my weight on it without too much pain. Of course I was in shock. We continued our walk to the Promenade and then headed back to Michael’s apartment to drop Lou off so we could walk to one of his favorite restaurants for lunch.

The restaurant was about eight blocks from the apartment and I kept swinging my leg under my chair while we ate, to see if it caused any pain. It actually felt good. Once we got back home, I proceeded to go about everything with just a little pain. I went to bed early and it wasn’t until I woke up at 3:00 am that I knew something was really wrong. I couldn’t move my leg without excruciating pain. My whole body ached too. It’s just not used to doing gymnastic-type moves like the one I did to try to catch my fall.

I lay in bed until I heard movement in the living room, and I hobbled to my door. It was Michael making coffee in the kitchen. When I told him what happened he said, “There’s an urgent care clinic in the neighborhood.”

Cliff Note version: Hairline fracture of the patella and the top of the bone underneath which is the tibia. Crutches, brace, pain medication. Stay off leg. Keep leg elevated with ice on it, don’t cook Thanksgiving dinner, don't go to the Macy’s Thanksgiving Day Parade, don’t go to the restaurants Michael and Meredith made reservations for, don’t go on any of the excursions that were planned for the nine days I was there.

Now I’m home and it has been two weeks since the Wake up Fall. The most important lesson I learned (and you don’t have to break your kneecap to learn it) is that we need to periodically be still. Just sit in one place and shut up! In the Bible, Psalms 46:10 the words are: “Be still and know that I am God.” It probably was advice about stilling our minds and feeling the presence of God right where we are, but I’ve taken it a step further, “Be still in body and know that I am God.”

I’ve had to be still now for two weeks and in that body stillness I found out that it helps my sidetracked-prone mind to be more organized! For example, I set up camp in my office in our basement and am only able to go upstairs with my husband Terry’s help.

Because I tend to run around like a chipmunk on fire a lot of the time, being forced to sit still has allowed my mind to come up with things I need to have and things that need to be done besides sitting at my computer and writing. I always keep a notebook with me and here’s what one of my lists consisted of after one hour of being in one place, and the beauty of it was it was all delegated to Terry:

While I was in Brooklyn, even in my invalid state, I was able to take care of the Christmas gifts for out two grandchildren who live there. Since we always give money, $100 to each grandchild for Christmas, I took sticky frames from my Stick it Right on the Money Gift Giving Kit (created to hold the money in a greeting card with the face on the bill framed) and instead placed them behind framed pictures on the wall. 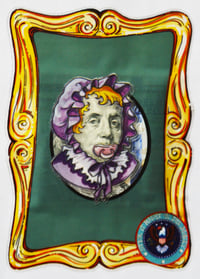 In each room I chose a framed photo, took it off the wall and stuck the framed money onto the back, decorated the face on the money with the disguise stickers in the kit (88 to chose from) and hung it back on the wall. The frames from the kit are Post-It Note sticky yet they are very secure behind the pictures I chose to use.

When I left to come home, I told Brooklyn (18) and Jackson (14), "I'll be texting you on Christmas morning to assist you in receiving your Christmas gifts." (They both know we give money and both have told me they love getting it more than presents, because they can buy what they want or use it for going skiing or whatever.)

For our grand kids in Boston, I'm going to frame money for them, disguise the faces, put my creations on sheets of paper and send them to the parents to hide like I did in Brooklyn. I can do that because of the Post-It Note quality of the frames (and stickers). Then I'll have the parents tell me what framed pictures they hid the framed money behind and on Christmas morning each child will get a text from us telling them where to find their "gift." 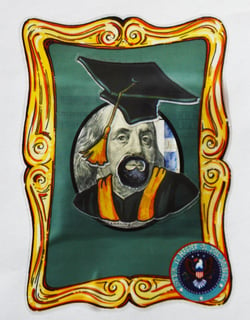 I've been giving money to our 12 grandchildren for birthdays and Christmas for about 20 years and it's so much more fun than shopping and trying to figure out what each one wants or needs. Oh, there's one other thing, when giving money for Christmas, you actually double the value if the kids take advantage of the after Christmas sales! Just click on Ben Franklin to the left, on the $100 bill to learn more and to purchase. The sooner you get these stickers, the sooner you can get your Christmas gift-giving finished and then you can go play! One more thing: any orders that come in today and tomorrow (December 6 & 7) I'll put a DVD called Everybody Loves Money in with your stickers. It'll give you 10 creative ways to give cash using items you already have in your pantry. It sells for $9.95, my gift to you for buying my stickers. (You can call me Santa Claus.)

Going through the holidays on one leg will inevitably show me how to delegate, eliminate and simplify everything that goes with this traditional holiday and I'll be sharing my instights with you as I go along.