Our GREAT grandson was born yesterday. He was ten days late and weighed in at 10 lbs. 1 oz! 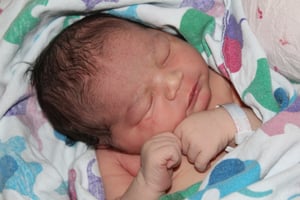 McKenzie, our granddaughter, said, "We eighty-sixed him and he was born on 8/6." Huh?" I said with the look that can only go with that confused remark. She then explained, "The term originally meant that a restaurant had run out of an item that was on the menu. But in my generation it's a term used when a customer at a bar or restaurant gets kicked out. 'We had to eighty six him.'"

Cassius was becoming like a guest who overstays his welcome. He was perfectly happy right where he was and every day after his due date, the whole family waited and watched as his accomodations grew bigger and bigger!

Oxytocin was the chosen bouncer and at 12:01 August 6, we all got to meet our new addition to the family.

McKenzie offered to let me hold him as he slept peacefully in her arms, but as soon as I had him in mine, he started fussing. If you're a grandmother, you know what a special touch you have with your grandbabies, and great grandmothers have to have that same miracle touch, but Cassius would have none of my expertise as a baby holder. There was no way I was going to prove my magic ability to soothe him (I'll get to do that later) so I gave him back to his mother. The second he was in her arms he took a big breathe and went right back to sleep! In the short time I held him I could've sworn he felt like a two-month old! So much for all the newborn baby clothes they have for him. 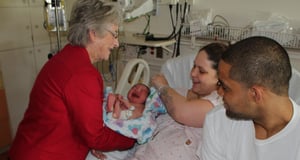 Have a great day! Thank you for allowing me to come into your space with my good news.