Three steps to hook up! HAH! 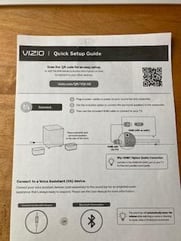 I don’t know about you, but I’m technically impeded. I can’t say it’s a genetic issue as my parents didn’t have to submit themselves to this technological torture by having to read instructions that are translated from Chinese to English by some 19-year-old anti-American Communist.

Last week we went to Costco and bought a surround sound system for our family room. It came with a simple sheet of paper, in the box, instructing us on how to hook up the system to our TV. THREE STEPS! We were excited to make the sound better in our TV watching room.

Step 1: “Plug in power cables to power on your sound bar and subwoofer.”

We minded and suddenly a huge mail voice invaded our room with one loud word: “SEARCHING!” Maggie leaped onto all fours from a sleeping position and barked her, “I’m-Going-to-Kill-You” bark. 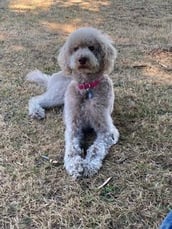 Terry and I startled and froze. The guy was quiet for about 10 seconds before he yelled it again. Ten seconds later, on the third time we were getting used to him. The only way we could shut him up was to unplug our first step in the process. Back to my theory that a Chines Communist is behind this. The SEARCHING guy was like Chinese water torture!

Step 2: “Use the included cables to connect the surround speakers to the subwoofer.”

We were able to do this step too, but because we’d unplugged the units so the SEARCHING guy was quiet, we weren’t sure what step two did, because the power was off.

Step 3: Then use the included HDMI cable to connect to your TV. (HDMI may as well stand for Hold Down More Inside.)

We couldn’t find the HDMI hole because the TV is black and the writing next to the various holes is black. Add cataracts to it, and it was impossible to see what hole the HTMI plug was supposed to go into.

Step 4: This was ours. Get a flashlight.

When we plugged everything back in, the “SEARCHING” guy woke up and started his torture. The volume button on the remote had no effect on his level nor did the mute button AND the TV wouldn’t go on.

Step 5: Another one of ours. Call Miguel.

Miguel has been with us for years, doing all our IT work. He does house calls and was able to come over a couple of days later. While we waited for him, we both took whacks at trying to get the system to work. I’d be in the kitchen upstairs and I’d hear, “SEARCHING.” I knew Terry was trying to get it to work.

Miguel came over and the first thing he discovered was that our TV was too old to hook up to the sound system. I didn’t remember that TV getting old, but I didn’t think it was dumb too. Miguel informed us we had to get a smart TV in order to use the sound system! (I don’t know what we’re supposed to do with our old, dumb TV. It still works, even though it has crappy sound. I guess I could take it to the deaf school in Vancouver.)

We got a new TV and Miguel got it hooked up and running. The “SEARCHING” guy must have found what he was looking for, because he hasn’t made a peep since.

There was one other choice we had in set up and that was whether or not to use the Bluetooth connection. I opted to not hook up to Bluetooth. I don’t even know what the heck Bluetooth does. Every once in a while, Terry’s cell phone will ring in his hearing aids, and he can’t find the phone. He says it’s hooked to Bluthtooth. He’s never been able to answer those calls. I certainly don’t need this TV or sound system to start playing in his hearing aids.

Tonight we’re going to watch a movie on our new TV. We’re going to have a fire, because my rule is, “If it rains three days in a row, I get a fire.”

P.S. I read that because of the backup of shipping in our country, it might be hard to get toys in for Christmas. I was thinking if you gave money this Christmas and used my stickers to disguise the faces on the money in funny ways, when shipping gets back on track, the kids'll have something to buy that they really want!