With Valentines Day just around the corner, here are two marital spats that can disturb your peace and the romance of this special celebration of love. If you’ve been married very long, you’ve probably had a form of both of them. Fortunately there is a solution to both common spats: GPS and hors d'oeuvres.

GPS, eliminates a common marital fight: “the map fight.” Most husbands expect their wives to be 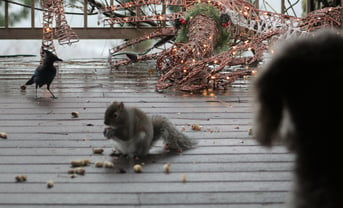 natural navigators. Most wives are not. The map fight most commonly occurs when the husband is driving on an unfamiliar freeway at 70 mph and he tosses the map to the wife and says, “Where are we?” If she’s like me, she can only read the map when the car and the map are going in the same direction and that’d be north. South is out of the question, because it’s just too hard to read a map upside-down.

I wasn’t prepared for the real world of marriage. My parents had three four fights in their entire marriage of 60+ years. It was always over the same issue. Dad would lose track of time fishing and as it started getting dark, Mom would get worried. The fight looked something like this. He’d come in the door wearing his waders and holding his fly rod in one hand and a couple trout on a string in the other. He’d hang his head with a beseeching, I’m-sorry look and Mom would shake her head, tighten her lips and sigh with a mix of disgust and relief that he hadn’t drown. My sister and I would run to our room, sure this would end our happy home because they were going to divorce and we’d be put in foster care.

In my first marriage, I learned quickly I was in for some advanced education.

Men are weird when they’re hungry (especially tall ones). I learned that truth early in my marriage to my second husband, Terry. When we were first married and it was dinner time he used to always be ravenous and, quite frankly, I didn’t like him when he was that way. He was six feet, three inches of uncontrollable hunger and he’d drive me nuts as I worked in the kitchen!

He didn’t act mean or cranky like some men do; he just acted like he’d skipped his meds if he were supposed to take some. He’d sort of be a combination of Kramer (in the sitcom Seinfeld) and Barney Fife (in The Andy Griffith Show) on speed. He’d dart around the kitchen trying to get closer to the pending meal. He’d find difficulty concentrating and our kitchen just wasn’t big enough for both of us, when he’d be famished.

A famished man definitely acts differently than a famished woman. It doesn’t surprise me at all that Swanson didn’t name their large-portioned TV dinner, Hungry Woman Dinner, even though an average lady can put one away with no problem. No one addresses the idea of a hungry woman because, quite frankly, we never are. That’s because we snack.

From the time we’re youngsters; we spend more time in the kitchen and therefore have more access to food than men do unless they’re cooks or chefs. If we women work outside of our homes, we carry with us snacking patterns gleaned from generations of female snackers. I’d bet that more business women have snacks in their drawers at work than men do. And men don’t have purses (a natural snack pouch) in which to tuck treats.

I think if Terry thought he could get away with it, he’d barge into the kitchen, from a snackless day at the office and head straight to the nearest open container of food. He’d wolf down the main course right over the frying pan and slop the sauce de jour all over the front of himself. He’d cool his burnt tongue in a stream of cold water from the kitchen faucet and continue his dishless forage leaning over the sink as he crammed. He’d stuff his already packed mouth with a variety of miscellaneous edibles within reach and wash the remaining side dishes down with a pot of soup he’d missed in his initial culinary attack on the kitchen. He wouldn’t talk, he wouldn’t think, he wouldn’t even taste, but he’d be full. It would take about five minutes.

So what’s the answer? Hors d’oeuvres! That thought hit me right between bites one night while I was fixing dinner. I suddenly realized something that could ultimately save 75% of couples who think they want to divorce, from the agony of disillusionment. (It might have even salvaged my first marriage, but that was too long ago to even think about. I’d decided I was going to apply it to my new husband.)

That’s because hors d’oeuvres send a chemical message to the male brain that tells the animal,      “there’s food ready to eat, NOW.” Terry told me that when he smells the aroma of food cooking, his nose is unable to decipher when that food will be ready to eat. A plate of hors d’oeuvres, on the other hand, goes straight into the blood stream, assuring the organism that everything is going to be alright. Now you might ask, “Why do you think men like hors d’oeuvres more than women do?”

Well, women like hors d’oeuvres too, but we don’t need them like men do. When I fix dinner I’m hors d’oeuvring through the entire cooking process. Many times I’ve hors d’oeuvred myself into a bloated stupor before I’ve sat down to the dinner table.

Even if you make hors d’oeuvres from part of the meal, held out and put on a special plate, it’ll do the trick.

Say you’ve prepared a roast chicken; just throw the cooked gizzard, heart and liver in the Cuisinart with a little onion, garlic and mayo, dollop the mixture on slices of cucumber and whack off a rosemary branch (if you don’t grow rosemary you should, it grows as prolifically as dandelions) and put them on a fancy plate that doesn’t match anything else in your cupboard. (You can find such plates and bowls at any reputable garage sale.)

Hors d’oeuvres can also be the contents of a refrigerator clean out. It doesn’t really matter what it is, as long as it is served IMMEDIATELY!

In French, hors d’oeuvres means outside of work. The French are smart. They were very clever to name this part of a meal, hors d’oeuvres because a hungry husband just outside of work needs something in his stomach. The French are also known for being romantic. They probably thought up the saying, “The way to a man’s heart is through his stomach,” which I think is true.

If you want to stop fighting over stupid things like who used the last square of toilet paper and didn’t replace the roll, serve hors d’oeuvres. If your marriage is threatened by quibbling over who uses all the gas in the car and coasts it into the driveway, serve hors d’oeuvres right there in the garage.

Hors d’oeuvres can save your marriage. Wouldn’t it be a shame if the only thing standing in the way of happier marriages is a glob of tuna salad on a nice crisp romaine lettuce leaf?

P.S. It’s always nice to name food in French. Look at the difference in the name of this hors d’oeuvres.

English name: The Meat from Last Night is Under the Cheese

P.S. If you're yo-yo-ing your weight, you might be interested in my book, The Mouth Trap: the butt stops here!  It's a totally different approach to losing weight and if you've been thinking about cutting back on carbs, this book will absolutely help you. Check it out.