We Are Never Alone 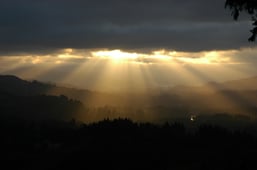 "Don't be afraid of the storm."

We dedicated “Sidetracked Home Executives: from pigpen to paradise” to Fred. It was a secret who Fred was (I’ll tell you why in a minute) and we didn’t tell anyone but family. Our mom and dad were tickled when they found out who he was. So were our grandparents.

When we wrote “Sidetracked Home Executives,” we prayed together every day to be guided to use our humor in writing on a subject that’s not funny…getting organized. God has the most exquisite sense of humor and our co-writing sessions were filled with laughter mingled with His. We took turns writing longhand in a notebook, which was then given to our assistant to type up for the manuscript, we had no clue what to do with when it was finished.

There’s a paragraph in the book about habits and it goes like this:

“Habits are automatic actions that take no conscious thought. When we walk, we don’t have to think about it; we just do it. Good habits are silent helpers. Organized people have established a force of good habits. There’s a story told about a baby elephant who was tethered to a pole by a steel ankle bracelet and a heavy, six-foot chain. When the animal was fully grown, his trainer removed the chain, leaving only the ankle bracelet. The elephant never ventured beyond the six-foot radius, which previously had confined him; bound only by a habit.”

We both loved that story and how it illustrated the power of habit. If an enormous animal could be physically bound by a simple habit, establishing good habits was a must in our trek out of our pigpens.

I bolded and italicized the word “ventured,” because it’s the star of this story.

We wrote every word of that book together. After a writing session, we’d let the words rest for a few days and then one of us would read what we’d written out loud for us both to hear. As I was reading the paragraph about the elephant, I came to that sentence: The elephant never ventured…..only the word “ventured” (written in my handwriting) looked like returned. So I read: “The elephant never returned.” I immediately stopped right when the word returned came out of my mouth, because something didn’t sound right. In silence, we stared at each other with identical, quizzical expressions as our brains took in that message and in unison, we burst into laughter. That one verb destroyed the point of the story as we visualized the elephant wandering off into the jungle never to be seen again.

We had such hilarious moments like that throughout the writing of that book. An outsider would have thought we were two sisters wasting time goofing off, not writing a book that would end up helping so many people get organized. Those hilarious moments were proof to us that God was with us.

The title of my blog today is, We are Never Alone. I believe that and yet I can feel alone sometimes. This month has been extremely difficult for me, but when I remember I’m not alone, I can feel the presence of God with me. I developed a simple game I want to share with you.

I’ve been practicing keeping my cell phone with me, because I’m getting ready to ditch our landline phone. When I pick up my phone, it lights up and tells the time. I decided that every time the time reads a double digit, like 6:55 or 1:33 or 4:11 those double digits remind me that God is with me and he's reminding me to know that. Through this hard time, it has been shocking how often those numbers come up in the course of the day! It’s like God taps me on the back to get my attention and then we smile at each other.

Of course God is with us all the time, it’s just easy to forget when we get frightened, or angry, or sad. We can all use a tap on the shoulder and a smile.

Fred is God. We didn’t want to dedicate that book to God because we wanted non-believers to read the book and we were afraid they’d think it was going to be a preachy book. We knew God knew who we meant and that’s all that counted to us.

I hope you try my little game and you’ll see for yourself how much God wants you to know you’re not alone…ever.

Have a good day!

I'm liquidating all my "physical" products and am giving aways lots of stuff. If you purchase the paperback book listed here, I'll give you a Stick it Right on the Money Gift-Giving Kit today, May 24, 2021.