It Happened One Night at Timberline Lodge 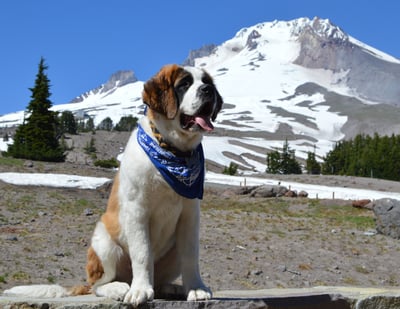 This is Bruno the new mascot at Timberline Lodge on Mt. Hood in Oregon. According to his trainer (Kim) he’s number eight in a line of Brunos that have graced the magnificent lodge built in 1937. Bruno just happened to be out with his trainer while we were at the lodge on Saturday. As a mascot in waiting, this day he was there to get used to kids of all ages gushing over him with kisses and hugs, posing with him for vacation memories, whistling at him and baby talking to him. He’s just six months old, but in this photo Terry took, he looks like an adult St. Bernard! He reminded me of one of those huge kids, that by appearance is expected to act older but doesn’t because he isn’t. Bruno was oblivious to all the people and only interested in other visiting dogs, birds, chipmunks, butterflies, flowers and the occasional drift of an aroma of food coming from some human’s lunch sack or snack.

That’s Mt. Hood in the background and Bruno was sitting on a rock wall (the trainer’s husband lifted him up for the photo shoot and said “In another month, I won’t be able to do this, because he’ll be too heavy.”).

We were at the lodge as a birthday gift from our son Eric who paid for dinner in the elegant dining room and a one-night stay in the most expensive room in the lodge. Our room had a fireplace with two boxes filled with wood for a cozy fire at night. We wondered if it’d cool off enough at night to merit a fire, but it did. As soon as we opened the window the breeze was refrigerated because it came right off the mountain which is still mostly covered with snow.

When we checked into our room it was like stepping into an old, but really good movie.

Timberline Lodge is on the historical register and everything has been impeccably restored right down to the furniture and single pane windows. On the coffee table between the two beds, along with Northwesty-type magazines and a book about the oldest hotels in America (someone had torn out page 122 which was the page all about Timberline Lodge) was an envelope with two pairs of earplugs in it (see the white rectangle). The only thought that came to me at the time was, ‘Someone must have left these.’ It was only until around midnight that it came clear to me what they were for. The walls between rooms are tissue thin and we were suddenly awakened to the audio portion of a very happy couple. Perhaps in our youth we would have enjoyed the production, but Terry and I couldn’t get to the earplugs fast enough!

If you ever get to the Pacific Northwest you must go up the Columbia River Gorge and then to Mt. Hood. We see Mt. Hood from our home and we were married at Timberline Lodge almost 30 years ago, so we love to go around the mountain at least once a year. When I think back to our honeymoon stay at the lodge I wonder if earplugs were discussed as part of guest necessities after we left. 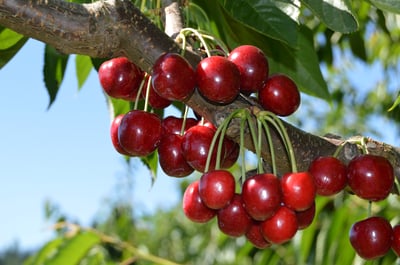 To switch subjects, as you can see by this photo, these cherries are not quite ready for harvest, but in about two weeks they’ll be unbelievably delicious as well as many other fruits from this beautiful valley on the northeast side of Mt. Hood. We're so thankful to live in such a beautiful part of the country where the abundance of goodness is evident at every turn. 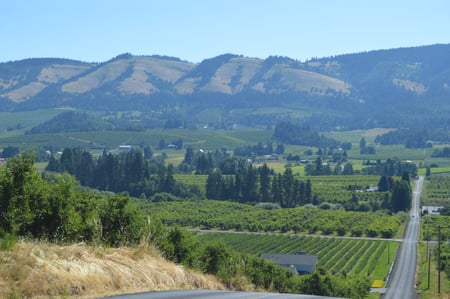 When I see well-tended farmland it makes me so grateful to the farmers for their hard work that goes into bringing food to our tables. Farming is a labor of love and this valley expresses such love!

Hope you're enjoying your summer as much as we are! As you may have noticed, I'm not posting blogs as much as I usually do. I've needed a break to finish my latest book, which is almost ready for publishing.

Three of my books are available on CD as audio books. "The GOOD Book: Get Out Of Debt," "The Sidetracked Sister's Happiness File," and "The Mouth Trap: the butt stops here!." Just click on the one you're interested in listening to.

PS If you're thinking about signing up for my live, on-line workshop with Kathy Roberts, on creating a weekly plan, here's the link to register. It's July 12, at 2:00 PM Pacific standard time. The class is filling up, so if you want a space don't wait too long.