Just Received the Best Gift Ever!

Last week I was given the best gift I’ve ever been given! Ally, my niece and her husband Harrison asked me if I would take Maggie, their labradoodle. Maggie is six-years-old and has spent three different weeks with us while her parents travelled on vacations. She loves to run on our three acres and is very comfortable with us. In this photo taken today, I had her jump up into a raised flowed bed with my gorgeous fire thorn bush behind her. She's looking at a squirrel in the yard.

Maggie has the manners of an Emily Post and eats like a model demonstrating a dainty approach to food consumption.

Harry and Ally are hard working professionals and their focus is on their careers. They were smart and loving enough to see that Maggie was not getting the attention she loves and deserves because of their busy schedules.  Ally said, “There’s a doggy cam at the doggy daycare place where Maggie goes and I’ve been so busy I haven’t looked at it in six months!” Ally is the art director for Columbia Sportswear which is headquartered in Portland, OR. Harry is a paramedic who became one after being on Wall Street on 9/11 as a financier. His building was across the street from the twin towers. He helped rescue people that day and shortly after quit his job and moved back to the northwest. 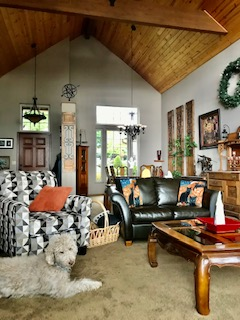 Maggie even matches my furnishings!

Two months ago I told Terry I wanted to get a dog because I’m a dog person and I hadn’t had a dog in more than 20 years. Terry is not a dog person, but knowing how much I love animals he understood. My guess is he thought I’d forget about it, because I’d talked about getting a dog on-and-off for those 20 years.

So I went on the internet and found out I can’t afford a labradoodle puppy. Yikes, they're expensive! I also thought about how much work a puppy is. And besides, it wouldn’t be fair to the puppy for me to get one because I don’t think I’ll want a dog when I’m 92 or be able to take care of an old dog when I’m one too. It also takes a good year to get a puppy trained and I have very strict rules. That caused me to consider a used labradoodle. There were lots to pick from, but I didn’t want a dog with issues. In one video the poor dog cowed down and could barely walk with her leash on and it made me know I’m not a rehabilitator-type person so I wouldn’t do well with a dog unless it were well adjusted.

As Terry thought, I quit thinking about how much I wanted a labradoodle even though it was simmering in some portion of my mind.

Then, in the form of a text, I received the question: “Aunt Sissy, do you want to have Maggie?” I

didn’t have to think about it. I texted back, “YES” I didn’t even check with Terry because he’d already been apprised of my desire to bring a dog into our home and I knew deep down he likes Maggie because she’s so well behaved. Maggie is a funny, no goofy’s a better word, beautiful, smart and well-mannered and together we will enjoy each other as only a dog and her master can!

So here I am, a new mom! I wanted to share this news with you because good news like this must be shared!

Love to you all,