Just What Do You Think You’re Doing?

The Magic of Habit

Do you know how valuable it is to have a daily routine that directs your day and leaves you organized with lots of free time to play?

I’m sure you do, or you wouldn’t be attracted to Flylady and me. But there are some daily routines that direct your day right into the ditch and you wonder what happened. That kind of daily routine is fueled by sneaky habit patterns of thought that disrupt your day and cause you to experience less than what you deserve.


What Do You Think You’re Doing?

Remember your mom asking you, “What do you think you’re doing?” Usually when she did, she’d probably caught you doing

something you weren’t supposed to do. That’s what moms are for and we ask that same question of our children when we catch them being sneaky. Now that you’re an adult, have you noticed that you can catch yourself doing something you don’t want to do? What do you do then? Do you let yourself carry out the action or do you stop yourself?

Habits, Good or Bad Cause Circumstances

Once you’ve established a habit, whether it’s shining your sink or drinking too much, you no longer think about the action, ‘shine the sink,’ or ‘have another drink,’ you just do it automatically! What a wonderful gift we’ve been given in this ability to establish a habit! BUT that gift is like having a pet tiger. How glorious to snuggle with such a magnificent creature and bask in its power. But that same animal can be dangerous and is capable of producing unhappiness, ill health and stress.

There was a television commercial about drug abuse and it showed a young girl strung out on drugs and the voice over said, “No one dreams of becoming a drug addict.” Just like that girl, no one dreams of having a dirty, cluttered and chaotic home, so what happens? Why are we able to do exactly what we don’t want to do? Or not do what we want to do?

Choose one action you’d like to have as a habit. You decide. It could be anything from go to bed at nine or get dressed all the way to shoes or set the table each night for dinner, you decide. Then do it for 21 days. You could write it down on a 3x5 card and use it as a reminder until it’s a habit, then you can throw the card away. If you’re serious about decluttering, I’d suggest that for 21 days you set a timer for 15 minutes and focus on getting rid of what doesn’t make you happy. Just think, you’ll have more than five hours of decluttering and you’ll make a huge difference in your home.

Thank you for reading my blog. If you want to learn more about how to be mindful of your thoughts, I suggest reading The Joy of Being Disorganized. You’ll learn how to get a clear picture of what you want and establish good habits room-by-room. 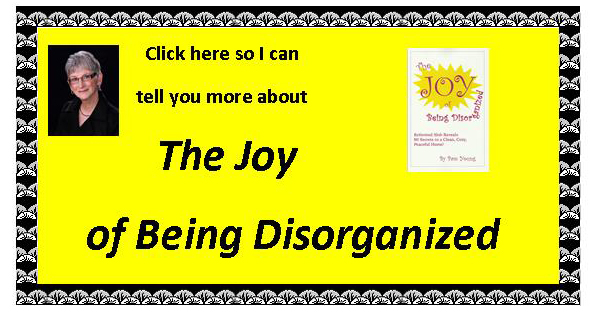