Part of training children is dealing with APM. It can happen after a party, a special holiday or any overindulgence. I’ve seen it played out in all three of my kids and all 12 of our grandchildren. Child psychologists call it over stimulation.

I remember being in the back seat of our Ford family car and coming home from a glorious day at the circus. My sister and I were decked out in new matching dresses and new shoes we’d got just for the special outing and we started fighting over whose circus program was whose (even though they were identical).

The battle triggered a rash of admonishments from both of our parents in the front seat. Dad was first, “Girls, knock off the bickering or I’m gonna stop the car and take the programs away!” Mom chimed in, “I can’t believe you girls are fighting after all we’ve done for you today. Here we take you to the circus, you got brand new matching dresses and new shoes and we let you have hot dogs and Cokes and souvenirs and you’ve been fighting ever since we got in the car!” I recall feeling ashamed.

APM tends to go into remission as children mature, but the potential for its reoccurrence remains even into adulthood and it sneaks out in adults in subtle ways but it’s no more attractive than the episodes children display.

APM can start with just an, “is-that-all-there-is” feeling. It can emerge as a vacation winds down, as we drive in the driveway with a cranky knowing of what was put off in order to have the fun. It can appear in the form of the “full” feeling after a feast, or the frustration of receiving credit card statements in January reflecting the joy of holiday purchases. Acquisition is fun! Maintenance sucks and so do the bills that follow it.

I have two granddaughters who are five months apart. I wrote the following after babysitting them for the afternoon, when they were two years old. (There is a 30 second video of them below. They're both 16 now.)

I absolutely believe that their antics are no different than those behind the fall of Enron. There is primitive envy, jealousy and greed between these two adorable babies. The older one has the power of age and experience on her side, even if it’s only five months. The younger is at the mercy of the older and more often than not, intervention has to take place. They, like most two and three year olds, are very possessive of their toys, clothes and even their car seats. MINE is one of the most powerful words they know.

I think most children are born with the proclivity to be greedy and envious. They actually have to be taught to share. Perhaps children who haven’t been trained in the basic rules of toddler etiquette grow up to be greedy corporate executives.

If a three-year-old sees that her younger sister is enjoying her favorite doll, her natural instinct is to go up to her sibling and rip it out of her arms. This action of course brings consequences. Mom or Dad gets into the fray, the ripper is chastised and the one who got ripped is given some object to appease her soul. To avoid these frequent squabbles, it’s far easier to provide an item (preferably bright and pretty) to entice the one who got ripped. When a three-year-old is taught the “trading game,” battles are reduced.

This trading game is as old as the moon. Men of the Wild West used the same tactic. “Here are some pretty beads for all your buffalo.” In our society today, I think that corporate executives use a more sophisticated version of this tried and true tactic on all of us regular folks. It’s basically a “you-can’t- have-what-we-have-but-we’ll-hold-up-a-cheapter-version-for-you” tactic.

Today we can have the equivalent to almost everything the wealthy have, just a cheaper version. That’s why Walmart is the largest retailer in the world.

When we were young, we got paid to go to the bathroom and we paid our kids who pay theirs. The main form of remuneration then was M & Ms and the little candy bribes continue to be just as popular and effective today. Under scrutiny the act of paying our toddlers to pee in the potty is probably the reason we have such a successful free enterprise system. We grow up feeling that we are very special and that even the act of elimination is extremely valuable and we should be compensated or we’ll pitch an APM.

If you’d like to see those two-year-olds I wrote about, here’s a very short video we took of them singing the ABC song that day I babysat them.

Here's a blog about the benefits of reading to your children. Just click on PaPaTerry reading to Brooklyn and Jackson.

If you’ve got Snuggle Bunnies this age and they tend to have messy rooms, the House Fairy can help! She inspires children to mind Mommy and Daddy, help around the house and keep their rooms neat and tidy and you get to sit back and enjoy! 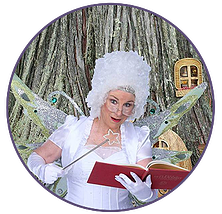