Merry Christmas from the Cheddar Family 2017

Happy Holidays from the Cheddar Family (a mouse family that lives in Terry & Pam's house).

The Cheddar Family Christmas letter is written by Mrs. Cheddar (Mozzarella is her first name).

Well 2017 has been interesting for my husband Colby and me. For one thing, we haven’t spoken to each other all year! That’s mainly because Colby loves President Trump and I’m really bummed out because Mrs. Clinton didn’t win. Oh, I didn’t need therapy like some of us liberals did (I'm really embarassed about what babies some of us have been), but I really have had a hard time with the loss. In fact, this election sliced my family right down the middle like, well, sliced cheese and Terry and Pam, the humans we live with, didn’t help any. 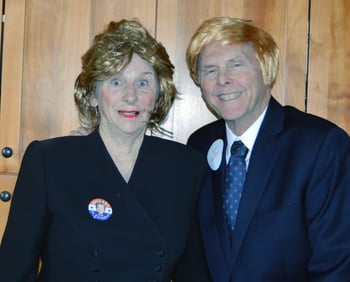 It all started back in October of 2016 when they went to a Halloween, costume party (before the election) dressed as Hillary and Donald. They claimed they had fun but Colby and I have noticed that they are political opposites and sometimes it hasn’t been pretty. For instance when they came home from the party, Pam threw the Clinton wig in the trash and then Terry did the same with the Trump wig.

I was thrilled to have new nesting materials! Since the Hillary wig hairs were a tiny bit longer than the Trump wig hairs, I made our new bed out of her wig (besides the hairs weren’t so bright as the orange, Trump hairs. Well, Colby refuses to sleep in the Hillary bed! I of course understand, because I wouldn’t sleep in a Trump bed for all the cheese and crackers in China either. So it’s been a standoff… which translates into no more babies under foot this year!

Actually that’s been a Godsend because we spent a ton of money on abortions last year! Most of my pregnancies were inconvenient as you might understand. And of course my sexually active young ones keep the lines long at the Planned Mousehood Clinic. Colby says, he can see the writing on the wall with a pending sonogram law that abortion clinics will have to show moms-to-be a live picture of the baby (in our case babies) before an abortion can take place. I know if I had to see those babies in me, I’d understand what I was actually going to do to them and I wouldn’t do it for sure. The prospect of that bill becoming a law, has sent Colby into building mode getting ready to house a new generation of Cheddars. For me, it’s just better that Colby and I remain celibate for now.

I keep hearing our country is split like it’s never been before and I say, “People, people, wake up and smell the cheese! Gheeze! Have you forgotten about the Civil War? Come on, really what are you thinking?" We mice haven’t forgotten those terrible times in this beautiful country. We have ancestors who lived in Scarlet O’Hara’s time and believe me, compared to then, we are just going through some bad hair days and I for one refuse to put much energy into this split. Life’s too short, I’ve got cheese to eat, nests to make and there’s always something to celebrate.

For instance, a dear, chipmunk friend of ours climbed up on the roof using the wisteria that grew over the eaves while Terry and Pam were in Italy this summer. When they got home, Terry cut the limbs away from the roof and Munkers was stuck up there for two months. Today, Pam got the idea to attach a pair of old pants to a clothes hanger, spear some peanut butter down one of the legs and hook hanger on the eave. Then she ran the peanut butter leg into the wisteria and Munkers was able to climb down. He’s pretty messed up from the experience.

He shared with us what life was like up on the roof for those two months! He told us it was like a war zone up there with no place to hide and he was totally dependent on fur cones falling on the roof in the wind for something to eat. He said he really got good at catching them before they rolled down and off the roof. I think he’s suffering from PTSD, because we’ve seen him trying to get back up on the roof when he now has abundance of food down on the ground where chipmunks belong. We had a party for him and his relatives, but he seemed to stay off to himself. Time heals all wounds and I’m sure in due time he’ll be back to himself.

This brings my letter to a close for another year as the Cheddar family wishes you a Merry Christmas and Happy New Year.