Save Money at the Movies!

Snacks at the Movies Too Expensive?

With the Academy Award nominations announced, does it make you want to go to the movies and see some of those films in the theater? We’ve seen a couple of them, but the cost of treats and tickets will soon be cutting into our vacation budget even though we’re senior citizens getting a break on the cost of our tickets!

For example, yesterday we would have spent $51.68 if we’d purchased popcorn, soft drinks and candy! As it was we paid $42 because we had water instead of sodas and we didn’t get candy. It got me to thinking about how to save money at the movies, by sneaking in your treats.

If you’re a senior citizen you probably know how you can get away with a lot when you’re out in public without being noticed. You could go the movies with a backpack (even though there’s a sign in most theaters that says NO BACKPACKS). Kids behind the snack bar, taking money wouldn’t even notice and if they did they’d think, ‘Oh that old lady has a backpack, it probably has an oxygen tank in there.’ In fact you can purchase a cannula (that’s the thing that goes in your nose and has tubing attached) for about four dollars, stick it on your nose and run it into a large bag full of your treats.

If you’re younger you need a more subtle way to sneak treats into the movies, and I’ve invented the perfect solution.

When we were purchasing our tickets to see “The Shape of Water” (sort of an R-rated “Splash”) we stood behind a young man and his date and as he bent over to get his tickets through that little window, his coat moved up a bit and I saw a big water bottle peek out. It probably was hanging off his belt.

Terry and I proceeded to buy our tickets and at the snack counter we bought two quart bottles of water at $5.00 each along with our popcorn (two large with butter). When you think about the cost of the water and do the math we were spending $20 a gallon for something we can get free! And we crab about our gas prices!

That set me to thinking about our next venture to the movies! I’m going to be prepared because I came up with what I’ve named “a treat shirt.” All you need is a man’s old dress shirt and an over-sized coat (if it’s winter) or a dress (if it’s summer) that opens down the front. The over-sized garment is to cover the treat shirt and you’ll just look like you need to lose weight.

If you watch this video, you’ll see how to make and use a treat shirt as I shared it on “Afternoon Live” a television talk show in Portland, Oregon. I figure if you watch five of the Academy Award nominees, you’ll save $148 by making this treat shirt and bringing your own snacks to the movies. You could also make a treat shirt for each member of the family, so you don’t have to be the major schlepper. http://katu.com/afternoon-live/books-authors/how-to-see-the-academy-award-movies-on-the-cheap

With the old lady in the news who has successfully stowed away on several flights, I’m sure part of her success is what we older women are able to do and that’s be invisible. I heard one reporter telling about her and he said, “She’s 66 years old and she has that Grandma look.” I say we take advantage of the Grandma look!

PS If you make the treat shirt, you could spend your savings on The Joy of Being Disorganized which will help you get organized just enough to please you. When you do that you'll have more free time to go to the movies if that's something you'd like to do. 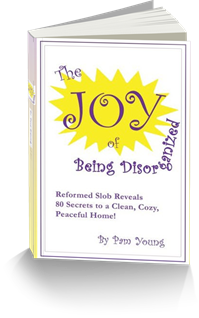