SHE Don’ts for Halloween 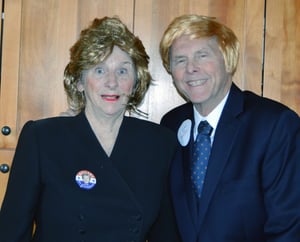 9 SHE Don'ts for Halloween

SHEs (Sidetracked Home Executives) have to be  very cautious when any big holiday comes around and Halloween is no exception. The excitement, assisted by our amazing creative abilities, can send us over the holiday edge into over-doing. The following DON’Ts will help you think twice before you make any big Halloween moves. (This photo was taken in 2016. We were dressed as Trump and Hillary before the election.)

1.  Don’t buy your favorite candy to pass out for trick-or-treaters. Instead buy all the candies you       don't like. That way you won’t be tempted to eat all the left-over treats on into Thanksgiving.

2.  Don’t decorate beyond your ability to undecorated. Think ‘What goes up must come down.’ Remember witches and pumpkins don’t look good with Santa and sleighs.

3. Don’t ask your kids what they want to be for Halloween unless you want to be up all night at the sewing machine or taping and gluing a costume that will never look like the intended character. Instead give them a choice between a ghost or a witch period.

4. Don’t go within 100 yards of a craft or fabric store after October 28. Those stores will be half-pricing all the Halloween stuff and you’ll be tempted to think you’ll have time to pull off some scary creations in time for Halloween. You won’t!

5. Don’t put an infant into a costume, make a costume for its carrier. You can watch a video on baby carrier costumes right here.

6. Don’t send your leftover Halloween candy to the troops. Candy isn't good for us, even though it tastes so good. It’d probably be better to send it to a terrorist organization. If you’re a democrat you could send it to Trump or if you’re a republican send it to Chuck Schumer.

7. Don’t let your kids go trick-or-treating without giving them dinner. There’s a cute commercial that portrays children melting down on Halloween because they didn’t eat.

8. Don’t forget to enjoy this fun day. Watch the excitement of your children and grandchildren and take lots of pictures!

9. Don’t let your age keep you from donning a wig, or wearing a costume when you’re out and about on October 31. It’s a Wednesday this year so have some fun at the grocery store, the gas station, the dentist’s or wherever you’re going.

It's not too early for creative SHEs to start getting ready for holiday gift-giving. Check out ELM (Everybody Loves Money). You'll get some great ideas for giving cash in creative ways.