"Fill 'em with fat, right off the bat!" When Terry and I decided to live a low-carb lifestyle, eight years ago, I went to a rather famous doctor in Portland, Oregon. She's a psychiatrist who, in addition to caring for children in her psychiatric practice, has a thriving practice helping low carbers understand the science that supports the low carb high fat diet. Her name is Dr. Ann Childers.

She was constantly telling me that she believes the epidemic of dementia, Parkinson's Disease and Alzheimer's is because our brains need fat and with the craze of low-fat products that have filled our world for the last 40 years, we've deprived our brains of the fat they need. (I'm paraphrasing her.)

I discovered early on with this way of eating that fat is the best food to stop craving and feeling hungry. If your kids are like mine were, they're hungry much of the time, and nothing seems to stop the little munchkins from rummaging around the kitchen like homeless guys in the park. Round and round they go pulling open cabinet, oven, pantry and freezer doors searching for something to eat.

Low carb, high fat cooking can come to the rescue, because fat stays with your body and gives you the kind of energy that lasts.....through the snowball fights, sledding, ice skating, snowman making, skiing, snowboarding, you name it. I think you'll love this easy, healthy snack that's better than ice cream and it's guaranteed to shut up your craving for junk food! What happens is you gradually weanyourself off of sugar and processed junk foods, because your taste buds change. After being on a low carb, high fat diet for just a month, vegetables like cucumbers, tomatoes and broccoli began to have a sweet taste to them and berries taste like candy they're so sweet. Candy becomes disgustingly and spit-outably sweet!

In this video, I show you how to make a snack that'll stop the the whole family (including you) from craving junk food.

Make a batch of low-carb rounds

Fry in half tsp. coconut oil on medium high heat as you would pancakes, making circles the size of an Oreo Cookie.

Beat thoroughly. Refrigerate to firm up just a little and roll into a roll. Wrap in plastic wrap and refrigerate until very firm; about an hour. Slice into circles and place between low-carb rounds. Serve immediately or refrigerate until serving.

If you’re leaning toward a Paleo lifestyle, The Mouth Trap: the butt stops here! is a fun and informative book I wrote, giving you creative ways to dump those fat-making carbs. I’ve lived this lifestyle for almost eight years and I’d never go back to the low fat, count-your calories, weight-loss diets of my past. 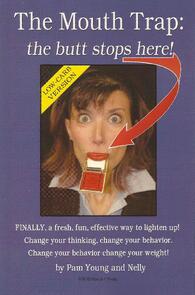