The Ending of Sidetracked Home Executives

"Sidetracked Home Executives: from pigpen to paradise" was written 40 years ago and on May 8, I will enjoy my 75th birthday! As the co-author of that book, my life has been so blessed and in the spirit of appreciation, looking back over it, I have something to report; we were all born to enjoy life and SHEs (Sidetracked Home Executives) have a corner on enjoying life even though that corner can be quite messy sometimes.

As I looked back, I got the urge to read the last paragraph in "Sidetracked Home Executives: from pigpen to paradise" because I remember how poignant that moment was when we received just the right words to end the book. Peggy and I were together in her living room and we knew we had to put closure to the first book we'd write (the first book ever written on how to get organized from a reformed slob's perspective). Here's what we wrote to end that book.

When we were within words of completing this book, we paused to contemplate the perfect ending. As we gazed out over a commanding view of the countryside, a bunch of ducks, flying in precision formation, flew overhead. We admired their inner gift of order and self-discipline, instinctively following a path ordained by God. In silent appreciation we smiled at each other. Then, as we glanced across the horizon, we saw two lone ducks diving and soaring joyously with the wind.

"Do you think they're gonna catch up with the other ducks?"

"I don't think they care if they catch up as long as they end up in the same place. Besides, they're having a ball on the way."

God bless each and every one of you on your way.

At age 75 I know that life is a journey and my personal journey from pigpen to paradise has been, and still is, material for a ride at Disneyland. It could be called From Pigpen to Paradise. Like the Haunted Mansion, you'd be ushered into an entryway to await your ride (a love seat for two). The entryway would be dripping in clutter and chaos and the love seat would have clothing hanging off the back and arms. A fake, sleeping cat (as only Disney could create) would be curled up in the middle of the seat. The ride would be a roller coaster that starts by going down instead of up. Of course the initial plunge would shock the spit out of you, because you'd expect to go up first like on a regular roller coaster.

After the initial nosedive, the underground roller coaster would take you on the twists and turns of a disorganized life with a virtual experience through the various aspects of a disorganized home inhabited by a disorganized family: a refrigerator stuffed with bad food, a kitchen with a sink filled with dirty dishes and counters piled with the history of many feedings, bedrooms with mounds of clothes on chairs, beds and dressers, a family room cluttered with toys, books, clothes, food, miscellaneous papers and pets.

With the technology we have today, the aroma of an over-flowing kitty litter box would waft into your nostrils, combined with the smells of laundry left in the washer a few days past its dry date and the odor of garbage under the sink begging to RIP at the nearest landfill would test your ability to restrain from gagging.

After the slob part of the ride is over, you'd be ready to leave the virtual, chaotic inner sanctum behind and 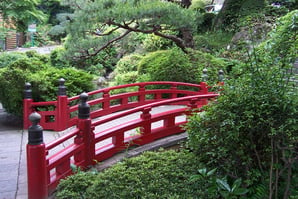 the love seat would come up from the pigpen into what would remind you of a virtual tour of a cozy, beautifully decorated home complete with the aroma of bread baking, fresh flowers in a vase, coffee brewing and soft relaxing music in the air.

Because I've experienced both worlds, one of the most stunning differences is that order is a bridge to peace and less work. Organized people do way less work than the disorganized do. They also spend less money, and have more time to play.

"Sidetracked Home Executives: from pigpen to paradise" is available as an e-Book and since I'm out of my office for the next two weeks, I suggest buying digital, because I closed my shipping department too. If you order any of my printed books, they'll be shipped on May 16, so there'll be a little wait. To order the SHE e-Book just click on the cover.

Click on the red bridge and it'll take you to a blog to help you declutter your home.

Bless you all in your SHEdom. There are more SHEs than you can imagine, because you tend to feel that you are alone in your mess. You're not and there is a way out!