The Squeaky Wheel Does Help When You Need it 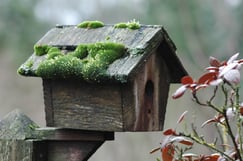 There’s a fine line between not complaining and being someone who doesn’t want to ask for help when it’s needed. In the last two weeks in April my heart couldn’t make up its mind between a doing a calisthenics-type heart rate or a deep meditation rate. When I told my neighbor (an ER nurse) what was happening, because she's aware of my heart problem she said, “You need to call your doctor Monday morning and tell him what’s goin’ on. You need to be a squeaky wheel!”

So on Monday morning I emailed my cardiologist and explained what had been happening for the last couple of weeks. By late afternoon I was carrying around a heart monitor with electrodes pasted to my chest. I was to be a walking information center for the next 30 days! But by midnight, I received a call from my doctor saying I needed a pacemaker as soon as possible. Seems my heart has been stopping and that’s not a good thing. By Friday I was in the hospital undergoing the procedure and by Saturday afternoon, I was back home with my new friend.

I have to say that the suffering I endured in April, put me in a state that if the doctor would have said, “You need a pacemaker and it’ll be the size of a large squirrel and will give the impression you have three breasts,” I would have said, “Let’s do it!” What the monitor revealed was that my heart was stopping for up to nine seconds when it would go from a fast heart rate to a normal heart beat. Those pauses were attention grabbing, causing a loud humming in my head, hot ears and face and a warning to get down on my knees in case I fainted. They were happening 10 to 20 times a day. 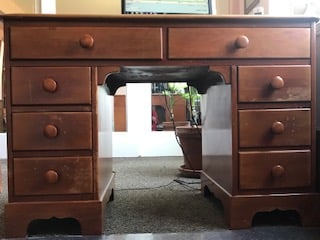 Because of the quarantine, I’ve been waiting for an elective procedure to stop the fast heart rates from happening in the first place. I was supposed to have that surgery (ablation) on April 8. I’ll still have it when they lift the quarantine. The pacemaker surgery is a very common one, but because they can use the word “emergency” with it, as in my case, they were able to take off the word “elective.” That’s why I got to get in so fast.

I’m extremely grateful for this technology and the people who think up these things. The battery in this sucker has to be changed every 10 years! I just hope I can remember it’s in there when I’m 87! Maybe some of you can send me an email to remind me in 2030.

I couldn't be happier and I feel as though I’ve just purchased a new car and I’ll get to test drive it as soon as I recover from the surgery. I've named her Porsche. Oh my we live in incredible times!

In my last blog to you, I showed you a photo of my desk I planned to re-finish. Well I did it and I’ll be taking a photo of it for you next week. I hope you’ve done some projects you’ve been putting off for a quarantiny day. So many of you have purchased the 3x5 card file system and De-junking video and I hope you're following through with setting the system up! I got out of the pigpen I lived in, in six weeks!

Stay safe, healthy and happy through this very interesting time.