There's More to April than Just the Rain

If you're the outdoorsy type you're probably excited for spring. No matter

where you live, there's nothing like seeing a cloudy day clear up and having the sun come shining through the gloom and getting out in the fresh air.

April, here in the Pacific Northwest, gets a lot of rain, but we get used to it, or we move to someplace sunny. Most of us don't own umbrellas, well a few BOs (Born Organized) do, we just have easy hair dos that can get wet and we learn to dash, our speed depending on the severity of the rainfall. "Movie" rain is the only rain fall that keeps us inside. We're like the wild animals around here who don't worry about 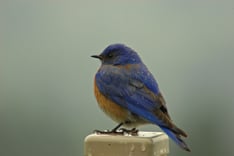 Today was intermittent "movie" rain all day long. We built a fire and I pulled out my spring wardrobe and got out the ironing board. Then I turned on Pandora for some music. I was not prepared for what happened next.

The music I love filled my living room with joy as I started ironing and watching the torrent outside. One performer after another took me to some wonderful memory of the past. Frank Sinatra, Barbara Streisand, The Carpenters. Then Celine Dion came on with a song called, "The Prayer." I wasn't paying any attention to the television screen which shows an image of the artist, but after Celine sang several bars of the song, I heard this amazing tenor join in a duet with her and I assumed it was Andrea Bocelli because the man was singing in Italian. Then I looked at the screen and saw the face of a teenager with curly hair. I had to stop my ironing to get a closer look at the screen and I just stared at this guy that looked about 17. His name was Josh Groben. Never heard of him!

I'm so embarrassed to say I'd never heard of this singer until today, nor had I ever heard him sing. It just tells you I don't keep up with what's going on in the entertainment world. I found out a lot about him after I finished my ironing and discovered he's been famous for at least eight years. Here's a link to Josh singing "The prayer" with Celine. https://www.youtube.com/watch?v=DbviXG_56ss&list=RDDbviXG_56ss

I'm so tired of suffering the results of my judgemental nature. I told Terry, "It's not fair that I've been given the gift of acute observation skills that a writer needs to possess, only to have them lure me into faulty conclusions that keep me from knowing a deeper truth about some person, place or thing." Terry gave me that look that says, "I have no way to fix this."

Sizing up Josh from his photo I would have guessed he was a waiter at The Olive Garden. It must be great fun for him to look so unassuming. I watched several YouTube videos of him and he seems like such a genuinely, lovely person who can sing like an opera star. But that's just me judging, (see or hear for yourself, if you've never heard of him either).

Now back to what April brings. Yes, it brings the rain that brings flowers and buds on trees. It brings hope for a new season of growth. It makes the birds get up earlier with their tributes to the new day. There will never be April 2018 again. Let's make every day of it memorable by appreciating as many moments of it that we can, rain or shine.

This blog was brought to you by "The Joy of Being Disorganized." It was written to help you get organized just enough to please you. Just click on the cover to order.