We Always Have a Choice

We celebrated Thanksgiving with a small part of my family and an interesting thing happened to me. I had to make a big choice, and it wasn't between having turkey or ham .

nameless, because of his fame. There were four adult women, including me, three adult men and two lovely teenagers present for the holiday.

I’m so used to cooking, and I love to do it, I just assumed I’d be part of the creation of the meal, but the woman of the house was so organized and had such command of her kitchen that I was rendered useless. It made me realize for the first time that when I “do it all” in my kitchen, which I tend to do, I’m rendering my guests “useless.” I vowed to change that when I got home. Maybe “useless” is too harsh a word, but I chose it, because the other two women did get assigned jobs as I sat on the sidelines like an old, benched athlete.

The three women in the kitchen were young, (in their 40s) and they all vacillated between meal prep

and intercourse with their cell phones. (I never find my cell phone in my kitchen; of course I have trouble finding it anywhere.) As I watched the feast-making activity I realized something else; it’s going to be a long time before the “feminists movement” can change the scenario and reverse this scene to three guys in the kitchen, chopping, cutting, tasting, stirring while the three women are playing ping pong, and shooting pool.

The choice I mentioned in the title was a choice of feelings to have. Was I going to feel like the benched athlete or the honored matriarch, deserving of being served? I picked the deserved, matriarch feeling and thoughts came to celebrate with that choice. I thought of all the Thanksgiving feasts I’d prepared without any help. I thought about how fun it was to serve my mom, dad and grandma. It’s fun to serve, because it’s fun to give, but there’s the other end of that serving/giving stick…the receiving end. The receiver is as important as the server! It’s time for those of us who’ve cooked our way into a place where we can start collecting our dues to put our feet up and let the service begin. If you have adult children it’s time to start being a gracious receiver and let the young ones enjoy serving. 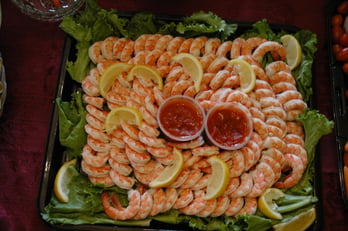 It kind of goes along with what Peggy and I wrote in "Sidetracked Home Executives: from pigpen to paradise," when we said, “Say no. By saying no to the requests from heads of school, church and other community projects, you give someone else the chance to get the credit.”

So I put my feet up and allowed the service with the grace of a seasoned queen. The woman in charge was a master hostess. She never let my Club Soda glass get below the mid mark and her hors d’oeuvres kept coming in delicious waves of tasty treats. At one point I saw her frying a few strips of bacon in a small frying pan (with the feast prep in full swing). The next hors d’oeuvres were her deviled eggs, with crumbled bacon sprinkled over each egg! That’s dedication! Terry, my husband, happened to stroll through the kitchen while she was making the deviled egg mixture and he reported to me that she put the hardboiled egg yolks into a quart-sized Ziploc bag and added mayonnaise, and seasonings and squeezed the ingredients until they were mixed. Then she cut a small corner out of the bag and filled the hollow egg whites. Brilliant! I’m never going to try it because my next set of guests will be put to the task.

Because it’s important to be mindful of our thoughts and feelings, it’s a good idea to take the time to analyze those moments when we don’t feel happy. I knew I didn’t feel good feeling left out, and I knew the “girls” had no clue I felt that way, it was all up to me to choose how I was going to feel. It was gratifying to realize when my feelings, changed I got to witness the results. Happiness.