When my husband Terry and I decided to change what we eat and that diet was going to go against both our physicians who promote a low fat, high carbohydrate diet, I searched out a physician in my area by using Jimmy Moore’s list of low carb docs www.livinlavidalowcarb.com.

Thanks to Jimmy, I found Dr. Ann Childers a child psychiatrist who also works with people like me who need encouragement and knowledge that we are doing the right thing, even though it’s against what the mainstream medical community tells us is right. I’ve said this before, “we’ve been told what’s wrong to eat is right for so long that when we hear what’s right to eat it sounds wrong.”

It was scary at first to eat chicken with the skin on, steak with the fat on, to cook with lard and have four eggs a day if I want to. At first I couldn’t believe I could eat butter, sour cream and mayonnaise (up to four tablespoons each a day) and to shun anything with a “low in calorie” or “low fat” label! The thing I discovered, using my own body as an experiment, was I am so much healthier today than I was a

Fat Head is a documentary about what’s wrong with what we’ve been told is the healthy way to eat. I interviewed Tom Naughton who produced and starred in it. We were on a cruise together and he was kind enough to give me an hour of his time. (His interview will be on my Make it Fun website very soon.) If you haven’t seen Fat Head and you’re interested in learning more about all the fuss you keep hearing about low carb this and low carb that, it’s available on his website (www.fathead-movie.com). You can also purchase it on Amazon, but if you want to rent it, it’s available through Netflix.

Terry and I recently went on the cruise I mentioned above. We joined 300 low-carb lifestylers. Jimmy Moore and his wonderful team

organized it. We all got to be together for dinner each night and our dining room was almost sea-level and in the very back of the ship (I guess that would be what you call the after birth). We watched several beautiful sunsets and enjoyed being part of the group.

We were privileged to be joined by some of the top experts in the field of restricted carbohydrate nutrition. These physicians, researchers and writers were very generous with their time during the cruise and I was able to talk to many of them on a personal level. Learning this very ancient healthy way to eat is such a new idea for most of us, and listening to the science behind this is fascinating to me. These experts were so generous with their knowledge; they allowed Terry to video tape their speeches so we could put them up on our website for you can watch them. In addition to their talks I interviewed Dr. Childers and that interview will also be available very soon.

I have re-written The Mouth Trap: the butt stops here! to update what I’ve learned in the last year on a restricted carbohydrate diet. It will be out this summer. I had such fun recounting this new way to live and sharing my ups and downs that came with changing the way I eat. It has been the best thing that has ever happened to me short of having children. 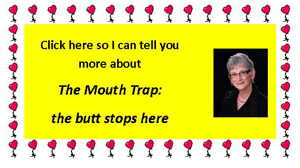