Are you always arguing with your mate over a messy house?
Do you think clutter control would help? Would you stop arguing if this problem were solved?

If you answered yes to these questions, I might be able to help! I must warn you I’m not a marriage counselor and I am on my second marriage, but I have learned some successful spatting skills in the 41 years I’ve been married and you just might find them helpful.

My ideas will work for many fights, but to illustrate my strategies, I decided to pick a fight that’s common among couples; clutter control conflicts. (Wow that’s a tongue twister: couple’s common clutter control conflicts. I dare you to try and say it five times without screwing up.) The underlying cause of this conflict is stuff. It’s the, my-stuff vs your-stuff which is the most common cause of a bout about clutter. One sees his stuff as his stuff and the other guy’s stuff as clutter and it works the other way around. It’s a blame game and couples have been playing it since Adam and Eve argued about whose leaf was whose that got tossed on the ground.

One thing you might be thinking is that planning to win a fight is manipulative, conniving, sneaky and conspiratorial especially coming from a woman, but wait a minute! Our history is filled with male heroes who won wars because, hello, they planned them. Men have created War Colleges, boot camps and military handbooks to win wars, so we are perfectly within our feminine rights to plan to win our battles and especially a war on the other guy’s clutter. Why do we get labeled as manipulative and men get turned into bronze statues for doing the same thing?

So with this fight in mind, I hope you’ll read my ideas for winning it.

The first step in this specific war is to put all your stuff away. I know it’s a preemptive strike, but it works every time. With all your stuff put away, it’s going to be obvious that he needs to do a little clean up.

Don’t bring up a problem with a man who hasn’t eaten in the last three hours. Feed him first and include lots of protein followed by just a taste of something sweet.

Don’t argue in your grubbies, or pajamas (unless it’s a sexy negligee). Argue when you
are dressed up, well coiffed and have make-up on. I call it the Doris Day  ploy. Remember she always had fights with her leading men and she always looked adorable.

Or you can choose the Marilyn Monroe trick, but that one requires showing off cleavage and you’ll still need to have your make-up on although it’s not as important. It doesn’t hurt to use your Marilyn Monroe voice and never let it rise into the frequency of fingernails on the blackboard range. Tip: If you keep your voice just above a whisper he’ll have to listen harder.

Have a plan. Be organized going into the spat by following steps one, two and three. Have a goal that is clear (a clutter-free living room for example).

The reward for a clutter-free home is peace. Lead your adversary into the battle front understanding the reward. We all want peace so there needn’t be a battle in the first place.

So you’ve got the plan, now go put away your stuff, feed him, get cute and bring it on.

Thank you for reading my blog! I hope you’ll share it with your friends and family. If you like my thinking here, you'll love my new book The Joy of Being Disorganized! It’ll help you see yourself with new eyes. You are so precious and your ability to get in a mess is a gift. If you haven’t thought of it this way, reading this book will change your mind and change your life.

If this blog has shed new light on your marriage, you'll like this blog I wrote http://blog.cluborganized.com/save-your-marriage-with-hors-doeuvres . 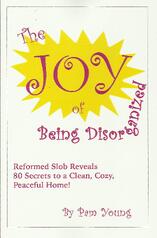 P.S. Please sign up for my blog in the space to the right at the top of the page.